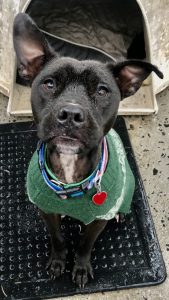 For decades, Pit Bulls were known as “America’s dog”, being favored for their unique loyalty and good nature. Their affinity and gentleness towards children earned them the nickname “the nanny dog”, which was further celebrated with Pete the Pit Bull canine companion in The Little Rascals. In addition to being a loved family member, Sergeant Stubby, the most decorated war dog with 13 decorations for his service in World War I, shows the intelligence and loyalty of Pit Bulls, and when it comes to photo icons, who can forget Nipper, the dog from the classic RCA Victor advertisements, who was a pit bull.

Sadly, this perception changed profoundly in the 1980s when dogfighting made a major comeback in America and their trademark loyalty of decades past, together with their strength and muscular body, made them prime for exploitation in the horrors of dogfighting, which has been romanticized by people with a perverse idea of being macho, living through the “accomplishments” of these approval-seeking dogs, and making them the preferred status symbol for drug dealers and gangsters alike.

This has led to much negative perception of these amazing dogs being viewed as “a problem”, instead of the unfortunate victims of horrific cruelty and abuse.  The media sensationalism of negative stories involving pit bull terriers has only increased uneducated blind hate and discrimination toward the most innocent of dogs, leading to Breed Specific Legislation and the punishment of good dogs and responsible owners.

The “Pit Bull Problem” is a human problem, as with most “animal problems”.  But Save-A-Pit and you can be the solution.

Save-A-Pit works to change this misguided stigma through education, awareness and providing these wrongly mis-understood dogs with the chance to show what, loyal, intelligent loving family members they truly are.

– Fights against the unfair and bias Breed Specific Legislation

– Promotes the positive with focus on what heroes they are today being service animals in Search and Rescue, K-9 officers, therapy dogs, in addition to loyal family members.

Pit Bulls, just as any other dogs, deserve to have happy lives free from bias, hatred and also laws to protect them.  We are working to make that happen and you can too, by getting to know a Pit Bull, educating others and donating to save lives.